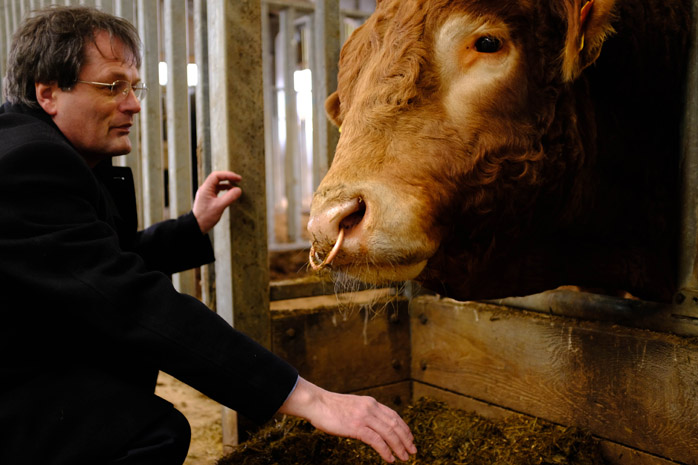 Cutting-edge DNA technologies have discovered thousands of bugs in cows’ stomachs that could improve meat and dairy production, and keep cattle healthy.

The findings build the clearest picture yet of how the microbes in a cow’s rumen - the first of its four stomachs - help cattle to digest, and extract energy from, their food.

Researchers from SRUC, the University of Edinburgh’s Roslin Institute and the Rowett Institute at the University of Aberdeen analysed the rumen contents of hundreds of cows and discovered thousands of bacteria, as well as archaea – a separate group of single-celled organism.

Pinpointing which microbes are essential for livestock wellbeing and food production could inform future breeding programmes.

These microbes enable cattle, and other ruminants, to convert plants and low-value products that humans cannot eat into food with high nutritional value, such as meat, milk and cheese.

The microscopic organisms provide cattle with nutrients and energy, contribute to the animals' health and, as a bi-product, release methane which is a concern for global warming.

The latest research follows on from a study by the same team last year, in which DNA data from 42 cows was analysed. Until this study, the diverse mix of bacteria and archaea that live in the rumen was poorly understood. Scientists had been unable to link DNA analysis to food digestion, animal health and greenhouse gas emissions.

The team used the latest DNA technologies, including a handheld sequencing device that can quickly generate DNA data that is incredibly long and detailed. This allowed the researchers to completely sequence the genomes, from beginning to end, of several new bacterial species.

Hundreds of thousands of novel enzymes, whose instructions are encoded in the DNA, may have potential uses as biofuels, or in the biotechnology industries. By analysing their genetic information, the team pinpointed previously unknown enzymes that can extract energy and nutrition from plant material.

The study is published in the journal, Nature Biotechnology.

Rainer Roehe, Professor of Animal Genetics and Microbiome at SRUC, said: “We’ve identified some 5,000 novel genomes of microbial species in the rumen that all play a vital role. Not only do they enhance breeding and nutrition to reduce greenhouse gas emissions from cattle, they also improve production efficiency, product quality and animal health.”

Professor Mick Watson, Head of Genetics and Genomics at The Roslin Institute, said: “The cow rumen is a gift that keeps on giving. We were surprised by how many completely new microbes we have discovered, which is far more than in our previous study. The findings will inform studies of cow health and meat and dairy production for many years to come.”