Scroll down to discover more

Dairy cows are traditionally fed forage-based rations, which in the UK typically include grass and grass silage. These forages contain soluble nitrogen (N) in excess of the needs of the milking cow. In addition, cows are often offered concentrate feed ingredients that are relatively high in rumen-degradable protein, such as co-products from the oil or distillery industries.

A long-running project, funded by Defra, has been run at Reading University, Aberystwyth University and SRUC, from 2012. Experiments have compared the performance from dairy cows either fed a conventional level of crude protein (CP) with that of cows fed lower levels of protein in their ration. These experiments have concluded that it is possible to feed a lower CP ration without detrimental effects on cow performance or health. SRUC are commissioned to run two farm-scale mini-systems with differing protein diets (one of which is similar to the industry norm) over 2 years, with the aim of characterising each system.

The first season has been reported. In the summer the groups grazed in the day and were indoors with a total mixed ration (TMR) overnight. From October all cows have been housed day and night. When cows were grazing during the day the Low group appears to have had a higher intake of overnight TMR but since early October TMR intake has been more variable for both groups (Figure 1). 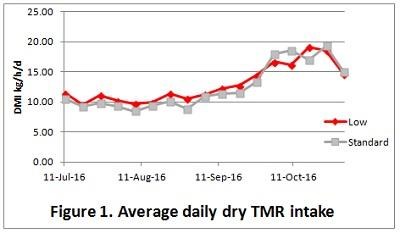 The Dairy Research and Innovation Centre aims to develop, implement and provide information from sustainable breeding and management systems for dairy cows.

Find out about the latest Dairy Research and Innovation Centre projects, from feeding to environmental studies.