We have recently had a case of babesiosis in the postmortem room followed by a couple of telephone enquiries. The total number of babesiosis diagnoses is small but plotting their distribution allows hot spots to be identified – including Dumfries and Galloway (see map below). Local knowledge is important as clinical cases may be seen infrequently and vets who are new to the area should be made aware of the possibility of encountering the disease. Climate change may alter the distribution of ticks and disease risk may rise if the period of tick activity or the length of grazing season increase. 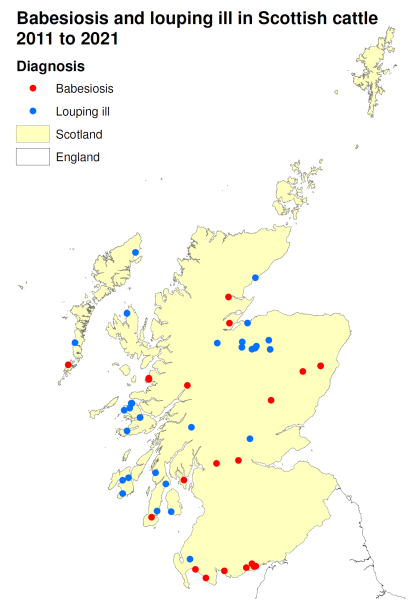 Distribution of babesiosis and louping ill.

Cases have been diagnosed between May and November, consistent with the period of tick activity, and both dairy and beef cattle have been affected. The presentation varies and has included cases with pyrexia, normal, or subnormal temperature. Some animals were found dead, and others were described as dull, anorexic, and/or anaemic with tachycardia, weakness or recumbency. Weight loss, nervous signs and a starey eyed appearance were also recorded. Ticks and dark red urine were not always observed. Analysis of pre-mortem blood samples returned packed cell volume (PCV) results of between 0.06 and 0.18 l/l (reference range 0.25 to 0.45 l/l), with two thirds being 0.10 l/l or less. Clinical disease is seen most often in adult cattle as calves have innate immunity. Immunity is not life-long and in the absence of re-infection animals will become susceptible again. A history of disease in recently introduced animals was only recorded in a small minority of cases.

EDTA samples should be collected from live cases of suspected babesiosis and blood smears made as soon as possible. Identification of characteristic Babesia divergens inclusions within red blood cells is diagnostic. Blood smears made after death can be difficult to interpret due to high levels of artefact, but a PCR test is also available. Postmortem findings can resemble copper toxicity with icterus, dark kidneys and haemoglobinuria.

Imidocarb can be used for treatment or short-term protection but has a meat withdrawal of 213 days. Sheep are resistant to infection with Babesia divergens so could be used to graze high risk fields but, in the absence of cattle, the parasite can persist in ticks for at least two generations. The risk of exposure to other tick-borne diseases should also be taken into account and prophylactic ectoparasite treatment applied.

Babesiosis is potentially zoonotic but human cases are thankfully rare with splenectomy the main predisposing factor.