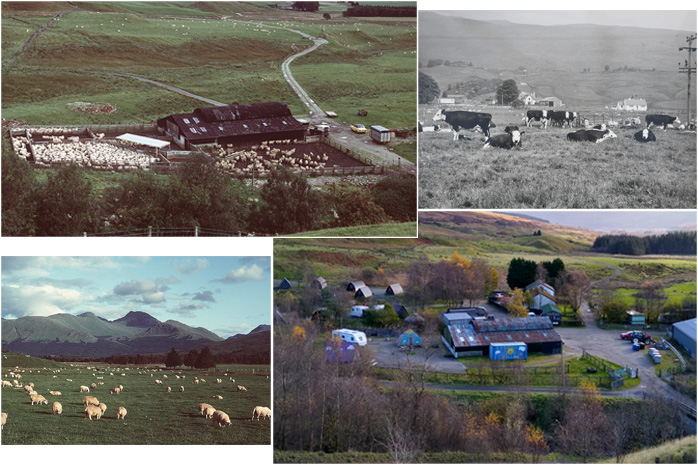 "Auchtertyre in the 1980s and present day"

Scotland’s Rural College is this week celebrating the 50th anniversary of its innovative, influential and international upland research and demonstration farms.

The former West of Scotland Agricultural College (now part of SRUC) took over the lease at Kirkton and Auchtertyre farms on 11 November 1969 – also known as Martinmas quarter day when leasehold payments were traditionally made.

At that time, the Board of Governors wanted the college to take on a hill farm “for the purpose of developing a new approach to sheep husbandry aimed at overcoming some of the problems of the hill farmer, by new methods”.

In the minutes of a meeting in June 1967, they also stipulated “there would be little justification in the college taking over land merely to demonstrate management on traditional lines”.

Fifty years on, the farms, near Crianlarich in the Loch Lomond and The Trossachs National Park, have proved to be an invaluable resource – not only for the Scottish livestock industry, but also in the UK and further afield.

“Everything we’re doing is just as relevant to livestock and grassland systems in places such as New Zealand, South America and the Tibetan plateau,” said Professor Davy McCracken, Head of SRUC’s Hill & Mountain Research Centre which consists of a team of researchers based at the farms.

“Many issues affecting livestock productivity and the impact on the environment are the same. Whether they’re from Iceland or Kazakhstan, visitors see something of relevance to what they have back in their home country.”

For most of the first 20 years, research was primarily focused on agricultural production and developing the best practice of the day to help hill farming increase its productivity.

This included buying in lime, fertiliser and feed to improve the nutritional value of hill grazings and increase the productivity of the animals by looking after their health and welfare.

“That worked very well and was very successful, innovative and influential in those early decades when you could get still get a high price for selling lambs – and wool –for relatively low input costs,” said Prof McCracken.

In the late 80s and early 90s, input prices started to go up and, at the same time, the price paid for products started to go down as consumer habits changed.

With such an intensive approach to hill farming no longer a viable option, the farms moved towards an extensively-managed system.

“We started to look more at the impacts – both positive and negative – of the grazing animals on different habitats and parts of the farm using GPS-tracking collars,” said Prof McCracken. “We also started to improve productivity of our Scottish Blackface sheep through enhanced recording of individual performance and selecting for those with genetics that allow them to do well in the hills.”

Over the past 20 years, the focus has continued to shift towards the use of precision technology, including ear tags, automated weigh crates and sensors, to collect data from livestock and the wider environment that allows hill farmers and crofters to make more informed management decisions.

In the early days, the Board wanted to show how hill farming and forestry could be integrated and in recent years, researchers at the farms have been demonstrating how establishing montane woodland high up on the farm can help with flood mitigation.

With little more than a farmhouse, a few old outbuildings and livestock pens on each farm in 1969, the site now boasts office space for farm and research staff, enhanced sheep and cattle handling facilities, wigwams, lodges and a yurt, and by 2022, will have a new teaching and events space for up to 50 people as part of the £35 million plan for SRUC’s South and West Faculty.

A growth area for the future is to get more students gaining hands-on, practical experience on the farms, whether that involves working directly with the livestock, implementing grassland management decisions, or learning how to manage habitats and wildlife.

“As a 2,200-hectare site with land ranging from 170m to 1000m above sea level, we’re a unique resource with a wide range of habitats on the farms,” said Prof McCracken.

“We have the capability to do a broad range of agricultural and environmental research and demonstrations, and have always been highly industry-relevant. That combination will ensure that we continue to go from strength to strength in the future.”