Not so wild goose chase 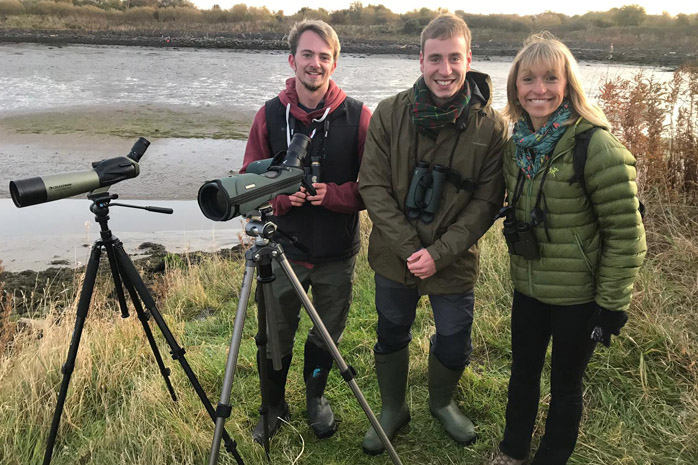 Bird watchers Gus Routledge, who is in his final year at SRUC’s Aberdeen campus, and Simon Ritchie – who graduated two years ago, have been looking for rare geese among the migrating birds returning to Scotland in autumn.

After chatting to a cameraman friend about their hobby, they were contacted by producers from Autumnwatch and spent last Friday filming with the crew.

“It went very well,” said Gus. “We travelled around Angus and south Aberdeenshire following the geese from their roost site at Montrose Basin to various feeding grounds on farmland and then back to the roost in the evening.

“We always go out at this time of year. You never know what you’re going to find. Occasionally rare geese turn up – it’s just a matter of being in the right place at the right time.

“We were lucky and managed to find a rare snow goose amongst all the pink-footed geese – there are only one or two records of this goose in Scotland each year.”

Gus got into ‘goose chasing’ in his first year at SRUC after doing a student placement at Scottish Natural Heritage’s Loch Leven National Nature Reserve.

“At Loch Leven, they have got about 20,000 pink-footed geese and I would go out and count them for SNH,” said Gus.

“Simon does counts at Montrose Basin where there have been as many as 85,000 pink-footed geese.”

The programme featuring their wild goose chase will air on Wednesday evening (30 October) at 8pm on BBC Two.