Wyoming students get taste of Scotland 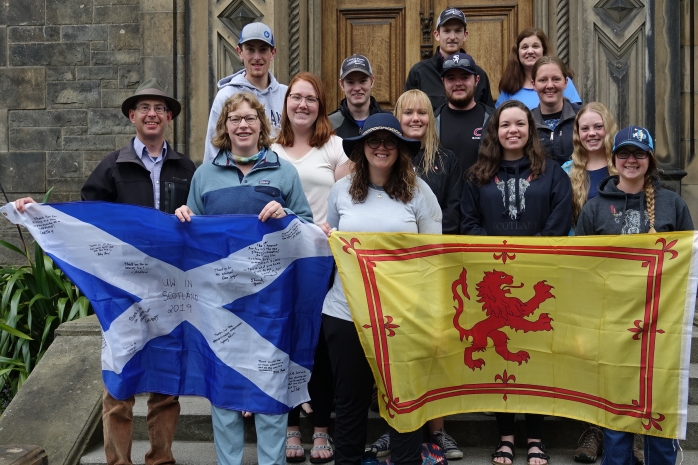 "Wyoming students on a visit to Scotland"

Students from the University of Wyoming enjoyed a summer study tour to Scotland with the support of Scotland’s Rural College (SRUC).

A dozen students, from a range of veterinary medicine, English literature, history, zoology, business and agricultural economics courses, visited SRUC’s Hill and Mountain Research Centre at Kirkton and toured several farms with SAC consultants as part of the 22-day trip.

They also enjoyed a day at the Royal Highland Show in Edinburgh, as well as taking in a distillery, castles and the Glencoe Visitor Centre.

The students, who ranged from first year to graduate students, were part of a class studying Scottish Rural Spaces: From Ancient Fields and Forests to Modern Food Systems.

Cole Ehmke, from the University of Wyoming, said: “Part of the motivation for the class was that in 2017, for the first time, more of the world’s population lived in urban rather than rural areas. Yet, while there are fewer rural people on site to manage environmental and natural resources, the need for these resources is greater than ever.

“The stops that SRUC organised were wonderful – the students were tremendously impressed with the way in which land was managed, crops and animals were selected and managed, and the many considerations that affect them, such as the importance of government policy; heritage features like stone fences; ways farms are earning additional money; Brexit with its labour and market concerns; and technology.”

The study tour was organised after Cole and his colleague Mariah Ehmke attended an International Farm Management Association Congress in 2017, organised by the Institute of Agricultural Management and hosted by SRUC in Edinburgh.

Dr Cath Milne, who helped organise the trip, said: “The connection made at that event led to an on-going link to support Mariah and Cole in the launch of a new study tour to Scotland by some of their students.

“Hopefully the study tour will be an annual event from now on and we can grow the links between the two institutions.”