Whale's entanglement wounds among 'most severe' 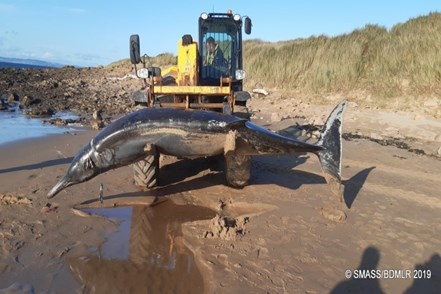 A Sowerby’s beaked whale found on an East Lothian beach suffered some of the “most severe” entanglement wounds ever recorded by the Scottish Marine Animal Stranding Scheme (SMASS).

Marine scientists from SMASS, part of Scotland’s Rural College, said the 14ft long, 650kg adult female died on the beach at Gullane as a result of entanglement, with a loop of rope embedded deep into her skin and blubber and severe trauma to the right pectoral fin.

During a necropsy carried out this week, the SMASS team discovered that the whale had been entangled long enough for the cord to work its way right through the skin and blubber layer and into the underlying muscle layer.

In some places, the skin had actually grown over the top of the rope, while in others it had set up a deep tissue infection and abscessation.

There were goose barnacles attached to the rope – an indication that the entanglement had considerably slowed the swimming capabilities of the animal. Based on the depth of the tissue trauma and the damage to the flank, it is highly likely this loop around the neck had been attached to longer and heavier material.

Despite its condition, the whale had still been able to feed, although not much and not recently.

Unable to swim effectively and most likely in a large amount of pain, the animal live stranded and died.

Dr Andrew Brownlow, who heads up SMASS, said: “This is the ninth cetacean entanglement we’ve seen this year and one of the worst we’ve ever encountered. This animal suffered for a long time, certainly weeks, possibly months and died what we can only assume was an agonising death.

“It’s not possible to work out where the rope came from, but it is similar to the type of material used in both recreational and commercial creel and net fisheries.”

He said that those involved in the fishing industry were in a position to address the problem of ghost gear and rope debris in the water, pointing out successful initiatives such as Fishing for Litter.

Dr Brownlow added: “There are things we can all do to mitigate this. Beach cleans work – every piece of debris, rope or net taken out of the marine environment is one less hazard in the sea. If you can’t remove it, at least cut any loops, which are particularly hazardous as they form a noose into which animals become trapped. Everyone is responsible for the current state of our seas. Everyone has the opportunity to improve them. Please take what action you can.”

SMASS thanked the National Museums of Scotland for use of the necropsy facilities, as well as Corinne Gordon and Richard Riddell from British Divers Marine Life Rescue and East Lothian Council for helping to recover the animal.

To find out more about the condition of beaches in Scotland, use the SMASS beach app: www.beachtrack.org or go to www.scottishentanglement.org to learn about the current work to address marine animal entanglements in Scotland.