Teaming up to tackle entanglement 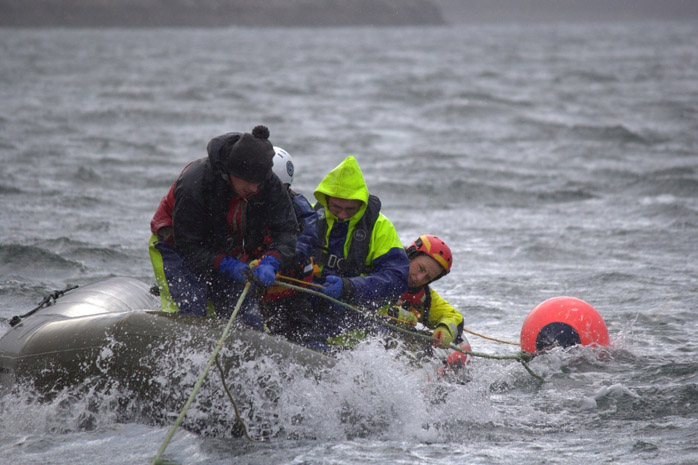 "Fishermen and BDMLR disentanglement team members on Loch Broom practising the ‘Nantucket Sleighride’, a technique originally developed by whalers and adapted to safely attach to and approach an entangled whale in order to disentangle it. Picture: Scottish Entanglement Alliance (SEA)."

In the first workshop of its kind in Europe, creel fishermen and women from around Scotland gathered in the Highlands to tackle the problem of marine animal entanglement.

Organised by the Scottish Entanglement Alliance (SEA) and funded by the University Innovation Fund through Scotland’s Rural College, 20 creel fishermen and women from the Clyde up to Shetland travelled to Ullapool to work alongside project partners with the aim of encouraging better reporting of entanglements, widen Scotland’s existing entanglement response network, and share insights to better understand, mitigate and respond to incidents.

The two-day course comprised a full day of on-water training on Loch Broom. Using local fishing vessels and buoys in place of marine animals, the fishermen assessed and approached both free-swimming and anchored whales.

Ellie MacLennan, co-ordinator of the SEA project, said: “Based on the available data, the rate of entanglements and range of species impacted appear to be increasing in Scottish waters, with conservation, human safety, welfare and economic consequences.

“We organised this workshop in response to requests from the creel fishing community, who do not want to see the animals they work alongside getting snared in their gear.

“The fact that many of those in attendance travelled hundreds of miles and missed several fishing days to join in clearly demonstrates the will within the industry to address this issue, which cannot be solved without the expertise and advice of the fishermen themselves.”

Since 1984, David has helped to develop unique rescue tools, techniques and training programs and has to date trained more than 1200 responders in 34 countries.

Following his first training workshop in Scotland, David said: “Working throughout the world on this issue of large whale entanglement, it’s clear from all the experts that what you need to do is find champions in the fisheries. And it is clear here that the Scottish Entanglement Alliance has found some real champions in the Scottish creel sector.”

David was assisted in the on-water training sessions by members of BDMLR’s dedicated large whale disentanglement team. This included Martin Boon, who was involved in the recent successful disentanglement of a humpback whale in Orkney, where the team worked with local fishermen and community members to free the animal.

Bally Philps, creel fisherman and west coast representative for SCFF, said: “Entanglement is the biggest environmental issue facing the static gear sector, not just in Scotland but around the world. This weekend was a unique opportunity to work with a range of other stakeholder groups to address this. Hopefully, this demonstrates that our sector is taking this issue seriously.”

SEA project partners are very grateful to all who gave up their time, donated use of their gear and vessels, suggested mitigation measures and contributed to broadening our knowledge base of the entanglement issue in Scottish waters. Further courses are now being planned around the coast.

To find out more, visit www.scottishentanglement.org