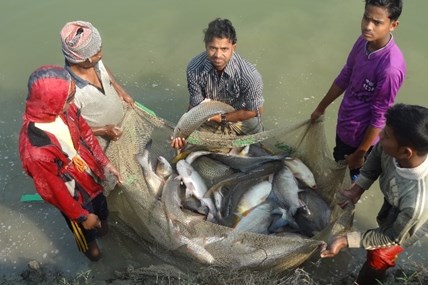 Global aquaculture generates around the same amount of greenhouse gas (GHG) emissions as the sheep industry, according to new research.

In the first study of its kind, researchers from Scotland’s Rural College (SRUC), FAO*, Cargill and WorldFish found that, in 2017, the fish farming sector generated 0.49 per cent of anthropogenic GHG emissions, or 263 million tonnes of carbon dioxide equivalent (MtCO2e).

The research, which has been published by Nature.com, was carried out to raise awareness of how and why GHG emissions arise in aquaculture supply chains.

It found that, while GHGs in aquaculture vary by system, the emissions from feed production generally dominate. Some systems, especially shrimps, also use a lot of energy for pumping water

Dr Michael MacLeod, who led the research, said: “Global aquaculture makes an important contribution to food security and is also a driver of economic development. But to enable sustainable expansion of aquaculture, we need to understand its contribution to global greenhouse gas emissions and how it can be mitigated.

“While the emissions from fish farming are unlikely to reach the levels of, for example, beef farming, it is important for the industry to consider ways to reduce emissions, which can also improve financial performance.

“There are lots of ways to reduce emissions, including developing genetically improved breeds suitable for lower feed conversion rates, improving health, using more precise feeding methods, and improving on-farm energy efficiency. Feed is the main source of emissions in most systems, so some of the reduction can be achieved before we even get to the fish farm, in the production of feed materials.”

The paper can be viewed at Nature.com