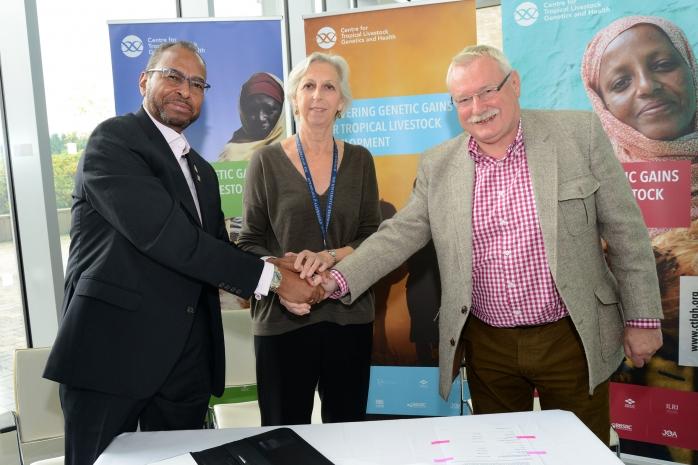 The founding partners of a global livestock research partnership, including SRUC, have signed a collaborative framework agreement to underpin its future for the next five years.

The Centre for Tropical Livestock Genetics and Health (CTLGH) was established in 2014 by the Roslin Institute (University of Edinburgh), SRUC and the Africa-based International Livestock Research Institute (ILRI).

At an informal celebratory event held at The Roslin Institute, collaborating researchers from Roslin, SRUC and ILRI celebrated the fifth Birthday of CTLGH and the heads of the three founding Institutes signed a new Collaborative Framework Agreement, which will support the work of the Centre for the next five years.

With research nodes in the UK, Kenya and Ethiopia, CTLGH is a flagship livestock research and development centre with the mission to enhance food security in low and middle-income countries via increased productivity, adaptability and sustainability of livestock in tropical production systems through genetic improvement.

Professor Wayne Powell, Principal and Chief Executive of SRUC, said: “We are determined to ensure that the Centre will continue to leverage many years of innovations that our respective institutions and other key partners have developed, to help strengthen livestock development globally.”

Professor Eleanor Riley, Director of the Roslin Institute, said: “We are delighted with the significant progress that CTLGH has made since it was established in 2014. This includes the delivery of ground-breaking scientific programmes that will define and position the Centre as an innovative global research and development partnership.”

Dr Jimmy Smith, Director General of ILRI, said: “Strategically CTLGH research is positioned for discovery. However, by establishing strong collaborations with industry and farmer facing programmes and institutions, the research generated by CTLGH can be translated, adopted and applied in the field for the direct benefit of livestock producers.”

To mark this exciting milestone, CTLGH has also launched its ‘Five Year Highlights’: a publication which promotes some of the many research achievements that the Centre’s scientists have made over the last five years and the collaborations and partnerships that have been established.

Professor Appolinaire Djikeng, Director of CTLGH commented: “This week has been a great opportunity to celebrate CTLGH’s unique and world class achievements over the last five years and plan for the future.

“The Centre is indebted to the support and continued commitment of its programme leaders, scientists, students, generous funders, collaborators and dedicated advisors and Principals.

The CTLGH highlights can be viewed here.