Four former SRUC students – including one who now works for SAC Consulting – are among the finalists in this year’s British Farming Awards.

Sheep and Beef Consultant at SAC Consulting Kirsten Williams and her husband Ross, who met at the Ayr campus before graduating in 2005, are shortlisted in the New Entrant Award: Against the Odds category.

The couple are up against another former SRUC student Ben Lowe, who graduated with a BSC Hons from the Edinburgh campus in 2014, after starting on the HNC Agriculture course four years earlier.

Meanwhile, Managing Director of SoilEssentials, Jim Wilson, and his business partner Robert Ramsay have been shortlisted in the Agri-tech Innovator of the Year category. 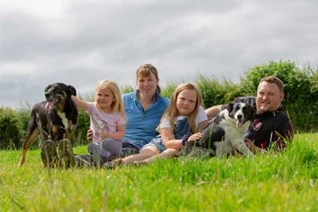 "Kirsten with her husband Ross and daughters Jess and Beth (©MelissaIrvinePhotography)"

Kirsten, who runs Upper Tullochbeg in Aberdeenshire with Ross, said: “We’re delighted, shocked and overawed. Just to be nominated is great recognition for all the hard work we’ve put in over the years.”

Ben, who works as an Agronomist at Agrovista, got his interest in farming from his grandad who worked as a farm manager.

While studying at SRUC, he worked on numerous farms carrying out irrigation, machinery and composting work.

After several attempts, he and his partner Harriet Ross finally gained a farm lease in Aberdeenshire in June 2019 on a farm owned by the Aberdeen Endowments Trust, where they farm 380 acres of predominantly arable land, with some pigs and cows.

He said: “I am very surprised and thankful to be shortlisted for the award alongside some very impressive new entrants.

“I couldn’t have achieved anything without Harriet who nominated me and should get a lot of the credit.

“I am also thankful for the years spent learning with SRUC, the support of family and friends, the Aberdeen Endowments Trust for giving me a chance, Agrovista’s support, and being able to do something I love to do.” Now in its eighth year, the British Farming Awards celebrate innovative, determined and extraordinary farmers across all sectors.

Jim Wilson said: “Entering awards is a really worthwhile exercise and helps you focus and identify what you are doing well. As a small company, we wanted to showcase and shout about the innovative work we are doing while championing the farming industry.

“In such an unusual year, being distanced from colleagues and adapting to new ways of working, to be shortlisted for the Agri-tech Innovator of the Year Award is extremely encouraging, providing a well-deserved boost and recognises our energetic enthusiasm for what we do.”

Due to the coronavirus pandemic, the winners will be announced at a Virtual Awards Night on Wednesday 21 October. For more information about studying at SRUC visit: https://ww1.sruc.ac.uk/courses-training/