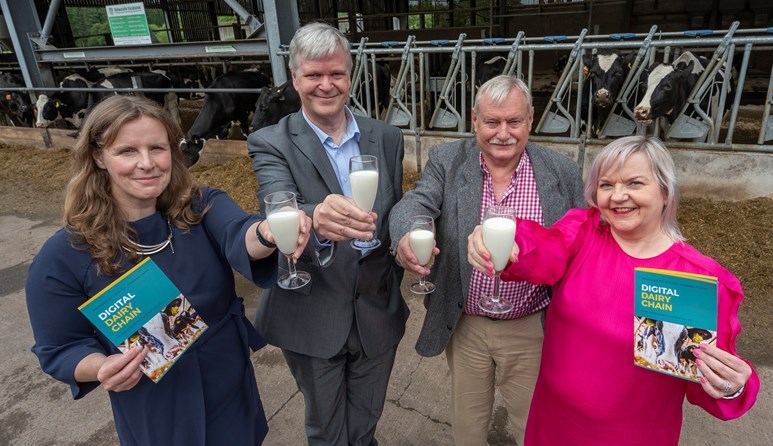 The South-West of Scotland and Cumbria will become the “go to” region for future investment in high-tech dairy processing.

This is according to project leads at the £21 million Digital Dairy Chain, which was officially launched this week near Dumfries.

Led by SRUC from its Barony campus, it will see partners across South-West Scotland and Cumbria focussing on developing a fully integrated and traceable dairy supply chain.

Aligning with Scotland’s Strategy for Economic Transformation, it is planned that  the Digital Dairy Chain will eventually lead to the creation of more than 600 jobs and generate £60m a year of additional value.

It will do this by attracting large dairy processors to the region, supporting investment in industry-focussed research and development and by turning South-West Scotland and Cumbria into a “magnet” for tech companies.

Ivan McKee MSP, Minister for Business, Trade, Tourism and Enterprise, gave a video address at the event. He complimented the approach of SRUC and their partners in delivering this investment.

Supported by £21.3m from the UK Government’s Strength in Places Fund, the Digital Dairy Chain’s initial focus will be on the use of sensors and data from dairy herds and how it can be utilised to produce more and better dairy products.

UK Government Minister for Scotland Iain Stewart said: “The Borderlands are home to many innovative dairy farmers and producers who are boosting the value of their industry and the region’s economy while also making significant improvements in both sustainability and welfare.

“The UK Government’s £21.3 million investment will help the development of these innovations by supporting the use of sensors and data right across the industry.

“We are also investing £4m in the flagship Dairy Nexus facility at the Barony Campus as part of our £265m investment in the Borderlands Growth Deal.”

Professor Wayne Powell, Principal and Chief Executive of SRUC, said: “Working with local and national businesses, the Digital Dairy Chain will transform the region’s dairy production systems and establish it as a global leader in advanced, sustainable and high-value dairy manufacturing.

“It will foster entrepreneurship, create new market opportunities, add new skills to the workforce and lay the foundations for more productive regions, all while making the critical journey towards net zero.”

Jo Lappin, Chief Executive of Cumbria Local Enterprise Partnership, said: “Innovation is critical to improving productivity and addressing labour supply issues and the Digital Dairy Chain can play a really important part in supporting our dairy sector to innovate. This matters to Cumbria as we are home to one of the biggest dairy herds in the UK. I am delighted that the Dairy Chain is now formally launched and look forward to continued close working with colleagues in SRUC to deliver this important project in South-West Scotland and Cumbria.”

In addition to SRUC, the Digital Dairy Chain comprises a number of partners in the region, including the University of Strathclyde, University of the West of Scotland, CENSIS, First Milk, Lactalis UK & Ireland, Kendal Nutricare, Cows & Co Group, National Milk Records and SmartSTEMs.

Cumbria and South-West Scotland is the UK’s second largest milk field, producing 1.9 billion litres each year, with a farm-gate value of £750 million. There are 52 dairy manufacturing businesses adding value to milk produced from 1,300 farms.

To find out more, visit the Digital Dairy Chain website.