Otitis Media due to Mannheimia haemolytica in dairy calves

Otitis media is most often seen in pre-weaned calves and it is often assumed that this is pathognomonic for Mycoplasma bovis infection. Mycoplasma bovis certainly is a common cause although other bacteria such as Mannheimia haemolytica, Pasteurella multocida, Trueperella pyogenes, Streptococcus sp. and Histophilus somni can also be involved.

A recent case, described below, highlights this.

Two, two-week-old, Holstein Friesian heifer calves were submitted to investigate ongoing respiratory disease in young dairy calves reared on a milk machine. Both calves were presented dyspnoeic and tachypnoeic, and one of the calves had a head tilt and ear droop to the right. The main finding in both calves was an acute bronchointerstitial pneumonia due to bovine respiratory syncytial virus (BRSV) confirmed by PCR and histopathology. The calf with a head tilt also had a secondary bacterial pleuritis and otitis media, with purulent material visible in the right middle ear marked by the arrow in the image below. Bacterial culture yielded a pure growth of Mannheimia haemolytica from the pleura and middle ear. No Mycoplasma bovis was identified from the lung or middle ear by culture or PCR. 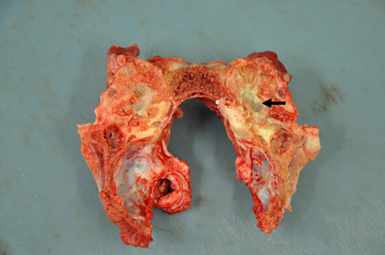 Bacteria can infect the middle ear via the auditory (eustachian) tube, haematogenously or via the external ear. Affected calves, as in this case present with ear droop which can be uni- or bilateral. Purulent material accumulates within the tympanic bullae and the involvement of adjacent cranial nerves (particularly the facial and vestibulocochlear) can lead to head tilt and facial paralysis with epiphora and loss of palpebral and menace reflexes in some cases. Ataxia, dysphagia, nystagmus, strabismus, opisthotonus and neck stiffness have also been reported.