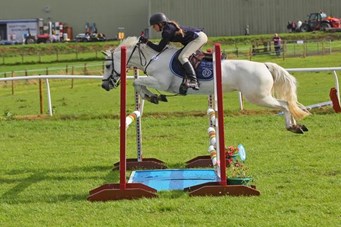 A record number of competitors and hundreds of ponies gathered in West Lothian at the weekend for one of Scotland’s largest equestrian events.

The Harbro Scottish Home Pony, which includes opportunities for show jumpers from across the British Isles to qualify for the prestigious Horse of the Year Show and Olympia, the London International Horse Show, saw 490 ponies and 290 under-16 riders attending.

Around 325 ponies were stabled onsite at the Oatridge campus of Scotland’s Rural College (SRUC), which is home to the state-of-the-art Scottish National Equestrian Centre.

The four-day event culminated in the Scottish Home Pony Grand Prix, with team medals fought out between Scotland, England, Ireland and Wales.

Scotland achieved silver in the Scottish Home Pony 128cm Team Competition, while the Grand Prix was won by England’s Claudia Harding and Where’s My Colour.

David Hopkins, Dean of SRUC’s Central Faculty, said: “Once again, the Harbro Scottish Home Pony was a terrific success, showcasing some of the finest talent the UK and Ireland has to offer. We were delighted to host this prestigious event at the Scottish National Equestrian Centre, which also serves as a wonderful asset for our students.

“Scotland’s Rural College offers a wide range of Equine, Veterinary Nursing and Animal Management courses and I would encourage anyone interested in finding out more to visit sruc.ac.uk/study.”