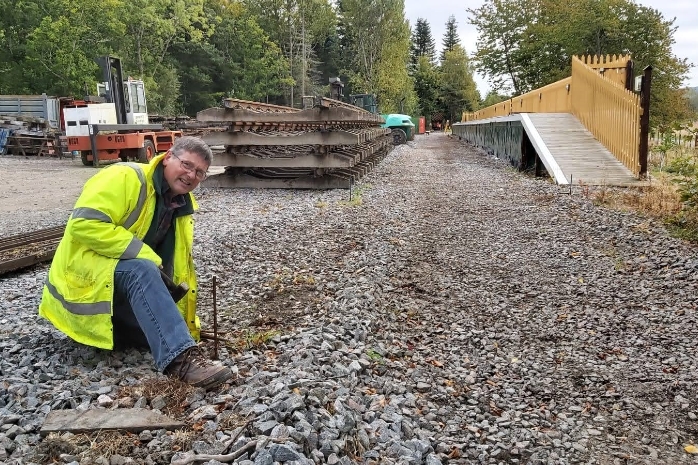 A consultant at Scotland’s Rural College (SRUC) has switched track from agricultural drainage to restoring a steam railway in Aberdeenshire.

Chartered Environmentalist Gavin Elrick, a Senior Consultant with SAC Consulting - part of SRUC, has been helping with the restoration of the Royal Deeside Railway at Banchory.

Gavin, who in his day job provides consultancy advice on soils and water issues within the rural environment, was asked to help set out the levels for a new section of track on the outskirts of Banchory.

The Royal Deeside Railway Preservation Society was formed in 1998 to restore the former line, from the Aberdeen Joint station to the former Ballater Railway Station, as a working railway.

Volunteers have since rebuilt the line from Milton of Crathes, home to the railway’s main station, to West Lodge on the outskirts of Banchory, where a second railway platform - Riverside Halt – has been built.

Gavin has provided assistance in laying the railway tracks into the platform at the correct height.

He said: “I was approached via my son Ellis, who in his spare time helps in the restoration of the railway.

“They wanted someone to help set out the levels for a new section of track, and I was able to use SAC survey equipment to do this.”

Due to the coronavirus pandemic, the railway hasn’t been able to operate any passenger trains this year.

However, it is planning to open for the 2021 season, with passenger trains running from the station at the Milton of Crathes to Riverside Halt over the extended railway line.