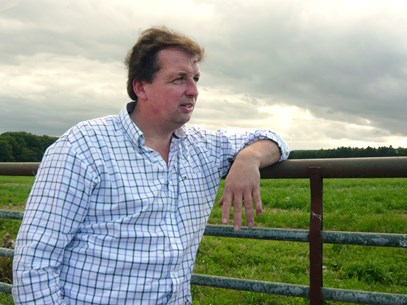 What started as a cursory interest has resulted in Mr Barron retrofitting two tractors and his farm jeep with a hydrogen electrolyser saving him 20% on his fuel costs.

David Barron of Nether Aden in Aberdeenshire was one of a small number of farmers who has worked with SAC Consulting, part of Scotland’s Rural College (SRUC), to identify ways to reduce his farm’s carbon footprint. What started as a cursory interest in adapting practices on the 203-hectare 130-cow suckler beef and arable farm, has resulted in Mr Barron retrofitting two tractors and his farm jeep with a hydrogen electrolyser saving him 20% on his fuel costs, he suggests.

The first electrolyser, marketed as HydroGen, was fitted as part of the Farming for a Better Climate project he was involved in was coordinated by SAC Consulting, in partnership with the Scottish Government. The aim of the project was to define practical ways that farmers could make changes to adapt to a changing climate. A subsequent project funded by the Rural Innovation Support Service (RISS) has brought together six Aberdeenshire farmers to explore further applications of the technology, including how to use surplus energy from farm wind turbines.

“The two biggest bills on my farm are fuel and fertiliser, both can be tackled by hydrogen,” Mr Barron, Chairman of the Scottish Beef Association, explains. “My first hydrogen converter was bought by the Scottish Government as part of the Farming for a Better Climate project, it cost £6,000.

“I’m totally sold on the technology, the unit has worked so well, and now that the price has come down to £1,000 each, so I’ve paid to have two more installed - one on another tractor and one in my jeep.”

In addition to the 20% fuel saving for all three vehicles, he has also seen other benefits. “There’s certainly more torque when you drive the tractors in a higher gear, which is very like driving a superior horsepower vehicle, and added to this, there are no emissions - there’s just nothing coming out of the lum.”

In monetary terms, the savings for David Barron’s telehandler – the first machine to be converted – equate to 1,083 litres of fuel, equivalent to 43,440kg CO2 and £596 annually, worth £2,980 over a five-year period. These calculations were made using SAC Consulting’s Agrecalc carbon measurement tool.

The hydrogen converter box is the size of a small suitcase, it contains a reservoir of water and an electrolyser which splits the water into hydrogen and oxygen by passing an electrical current through the tank. The resulting oxyhydrogen is injected into the conventional diesel engine at a rate of approximately 6%. It was installed by a small business called Water Fuel Engineering from South Yorkshire, who suggest a reduction in fossil fuels of circa 20-25% and an 80% cut in vehicle emissions.

“The technology won an award at the Highland Show last year, chosen by local MP, David Duguid,” David Barron adds, suggesting that he’d like the next stage to be doing away with diesel completely. The manufacturers claim the other benefits as a ‘better burn’ of fuel which leads to a cleaner engine, meaning that diesel particulate filters need to be replaced less frequently.

Commenting on the wider findings from the Farming for a Better Climate project on David Barron’s farm, local coordinator, Alan Bruce from SAC Consulting said:

“David’s passion is his livestock, so as part of the project, we looked at some other ways to improve the farm’s carbon footprint, including making better use of inputs like muck and fertiliser, for example,” Mr Bruce says.

“Taking account of the nutrient content of the muck combined with soil nutrient test results delivered extra yield from grass, which allowed David to increase cow numbers by 30 from the same inputs and land area.

“The combination of the hydrogen converter and the efficiency gains for the livestock enterprise demonstrate what can be achieved to positive address climate change with relatively small changes to farm practice,” Mr Bruce concludes.