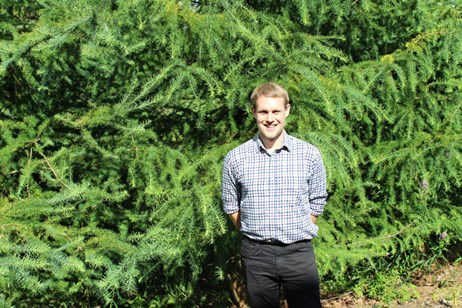 Those who think forestry is all about felling simply can’t see the wood for the trees. This is according to the person charged with revamping the subject at Scotland’s Rural College.

Martyn Davies recently took up his new role as Senior Forester within the Integrated Land Management Department, conducting a root and branch review of how to encourage more people into the industry.

“I think there are a lot of myths about forestry,” says Martyn, who is based at SRUC’s Barony campus in Dumfries. “Harvesting is the most visible aspect of the industry, but there are a huge number of job opportunities associated with it, from establishing the trees in nurseries, through planting them out in the countryside to managing those new woodlands and forests for decades before harvesting.

“It’s a long-term industry, with a spruce stand taking 40-50 years to mature. Some people can get emotional and say things like, ‘this tree’s been here my whole life’. That may be true, but they forget that the crop was planted for a reason.

“Something else a lot people don’t realise is that one of the best ways to lock up carbon dioxide is in finished wood products. Even a shelf, for example, will retain a lot of Co2, while incorporating much more timber into construction markedly reduces the negative impacts associated with concrete.

“Indeed, concrete is currently responsible for around 8 per cent of global Co2 emissions – if concrete was a country it would be the world’s third-largest emitter after China and the USA.”

Employing around 25,000 people and worth more than £1 billion a year, forestry plays an important role in the Scottish economy but, says Martyn, attracting more people into the industry is essential if the country is to achieve its 50-year vision.

Speaking before joining SRUC colleagues at Forestry Expo Scotland in South Lanarkshire on 22-23 August, Martyn says that one of the most appealing aspects of the industry is the opportunity to “leave a legacy”.

“If you’re involved in planting, it could be another 20 years before another human being sets foot in that wood,” he says. “It’s about growing a sustainable future.”

SRUC’s Barony campus, which is home to state-of-the-art forestry simulators, offers National Certificates and Advanced Certificates in Forestry and Arboriculture.

Martyn, who has been involved in forestry since he was a teenager and spent two years researching and working in Oregon, says SRUC’s South and West Faculty is perfectly positioned to train the foresters of the future.

“It’s an industry that’s all around us,” he says. “Timber is used in everything from biomass boilers to cricket bats and everything in between, but we need to ensure that forestry continues to grow. SRUC and our students have a huge role to play in that and we’re relishing the challenge.”