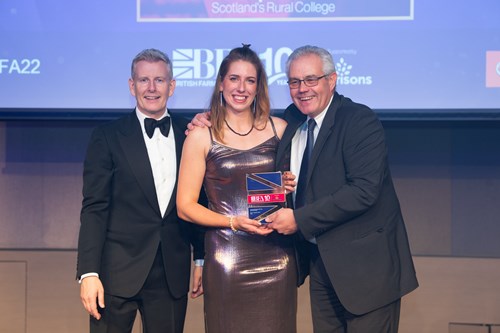 Rhona Campbell-Crawford has been crowned Agricultural Student of the Year.

SRUC student Rhona Campbell-Crawford has been named Agricultural Student of the Year in the British Farming Awards – despite not coming from a farming background.

The fourth-year Honours student from Crieff beat off competition from three other finalists – all from Harper Adams University - to take the top award at last night’s ceremony in Birmingham.

The judges said: “In the face of adversity, Rhona displayed a tenacity to pursue a passion for agriculture both inside and outside academia. Her effervescent personality, combined with her impressive knowledge of the many challenges facing the industry, made her a standout finalist. She is a fantastic ambassador for those from a farming and, indeed, non-farming background.”

Rhona said she was “ecstatic” to win the award.

“I didn’t expect this at all,” she said. “Just to be nominated and be in the final was a win in my eyes. It is a pretty incredible feeling.”

Rhona, who started her SRUC journey at Oatridge studying for an HNC, and then HND, in Agriculture, is now in her fourth year of an Honours degree at the Edinburgh campus.

She did a ten-week summer placement with SAC Consulting, working out of the Lanark and Stirling offices, and has been offered work with them while she finishes her degree.

“SRUC has been an integral part of everything, giving me the technical knowledge and the practice to go from the bottom of the pecking order to being able to give formal advice to farmers,” said Rhona.

Agriculture lecturer and programme leader Craig Davidson, who nominated Rhona, said: “We are so unbelievably excited to have witnessed an incredible young lady be recognised for all her hard work over the years.

“The fact Rhona is not from a farming background, and was recognised over others who are, is testament that there is a place in agriculture for people from all walks of life.

“This is a very proud moment for SRUC.”

As well as Rhona, two former students came away with prizes on the big night.